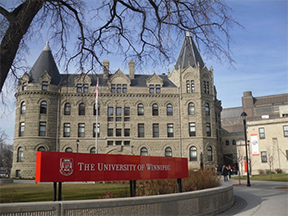 Winnipeg, MB (October 25, 2017) – Today, a motion in favour of Boycott-Divestment-Sanctions (BDS) against Israel was voted down at the University of Winnipeg Students’ Association’s (UWSA) Special general meeting.

Anti-Israel activists were unable to persuade a critical mass of UW students to support this initiative, thanks to students who organized the campaign opposing it. The University of Winnipeg is just the latest campus to reject BDS.

“This would not have happened without the tireless work of students who refused to remain silent in the face of discrimination,” said Arielle Branitsky, Director of Hillel Winnipeg. “Their efforts ensured that this hateful motion failed. Initiatives like these only fuel bigotry and deepen divisions while doing nothing to advance meaningful dialogue on the conflict.”

“We are pleased that UW students voted to reject BDS,” said Judy Zelikovitz, Vice President, University and Local Partner Services at the Centre for Israel and Jewish Affairs (CIJA). “We commend our partners, Hillel Winnipeg and StandWithUs Canada, both of which worked with us in supporting students at UW. BDS initiatives are at odds with academic freedom and often violate human rights codes by calling for discrimination on the basis of national origin. They have no place on a campus that welcomes diversity and debate.”

“This campaign of hate has no place on campus,” said StandWithUs Campus Director Zina Rakhamilova.

CIJA, Hillel and StandWithUs will continue to work in partnership to support students combating hate, discrimination and BDS on campus.

The Centre for Israel and Jewish Affairs (CIJA) is the advocacy agent of the Jewish Federations of Canada-UIA.