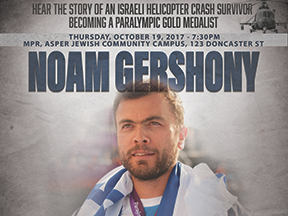 On September 8th, 2012, an entire nation watched as the flag of Israel was raised over the London Paralympics and as tears appeared on the face of the emotional young Israeli tennis champion, Noam Gershony. Six years before his gold medal win in wheelchair tennis, Noam was serving as an IDF Apache helicopter pilot. At the outbreak of the Second Lebanon War, he was severely injured in an operation that brought two helicopters down. Thanks to the initial work of the IDF's search and rescue unit. the doctors at Ramban hospital, and Noam's positive attitude, he not only survived but now serves as an inspiration for people around the world.  Join us to hear Noam's story of overcoming physical and mental obstacles, and how the power of sport can change one's life.  7:30 pm Multipurpose Room, Asper Jewish Community Campus, 123 Doncaster St. No admission. RSVP recommended. Contact Arielle Branitsky at abranitsky@jewishwinnipeg.org for more information. Presented with support from The Asper Foundation, HIllel Winnipeg, JNF U, Jewish Federation of Winnipeg, JNF Manitoba & Saskatchewan, and Rady JCC. 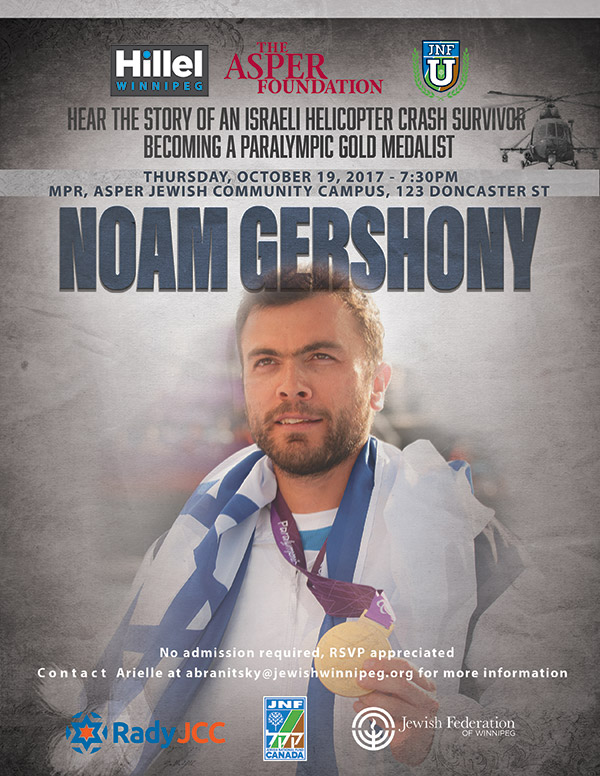