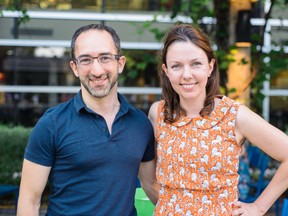 On June 25, YAD hosted a delicious BBQ at the Jewish Foundation of Manitoba Gardens, as its final event before the summer break. The BBQ put an exclamation mark on a fantastic year for YAD that included Campaign Cell-a-thons in September, the Vodka-Latke reception in December, a curling event in January, and the Shabbat Across Winnipeg dinner in March. Over 70 people attended the BBQ, including 6 who were on their exploratory visit from Israel. The BBQ was also highlighted by a performance from musical duo Roger Roger, and a speech from YAD board member Jessica Kerzner, who spoke about getting involved in YAD as a new community member, and how it has helped her settle into the Winnipeg Jewish Community.

YAD would like to take this opportunity to thank its wonderful BBQ sponsors, including Camp Massad (burger sponsor), the Cambridge Hotel (liquor sponsor), and Rady JCC, which provided child care services during the event.

YAD would also like to thank everyone who has come out to a YAD event in the past year. These events do not succeed without your attendance and financial support to the Jewish Federation of Winnipeg. YAD is looking forward to the Combined Jewish Appeal campaign launch in the fall and is excited to speak to its members about how they can ensure that YAD continues to put on great programs in the coming years. Have a great summer!