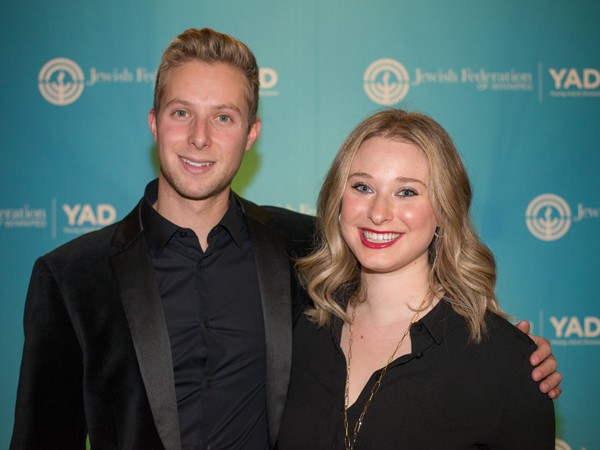 As published in the Winnipeg Jewish Review in January, 2015:

BAILLIE CHISICK AND JARED AKMAN: YAD IS HOT AND GETTING HOTTER!

Baillie Chisick and Jared Akman are passionate about being this year's co-chairs of the Jewish Federation of Winnipeg's Young Adult Division [YAD] because they understand the impact the Federation makes in ensuring ours is a strong and vibrant community.

The 30 years old Akman, who has been working for the last seven years in his family’s construction company, Akman Construction (he is the 4rth generation of Akman's involved in the company) has been active in YAD for the last five years.

"I got my start by sitting on the Allocation committee where I learned how the money is allocated among the community [beneficiaries] and the impact it has."

As he says, "When I first sat on the Allocations committee I could see how the campaign reached our Jewish Community and the importance of the support it provided. I felt that our younger demographic needed an appreciation of what Federation accomplishes and how critical it is for them to be engaged. I am quite passionate about our young Jewish community and feel we can accomplish so much together."

The 29 year old Chisick, a Corporate and Commercial Lawyer at Aikins MacAulay & Thorvaldson, says, "Our goals are to engage as many new donors as possible. By engage, we mean to reach out to people for first time gifts and to reach out to those new donors to show that they are more than just a campaign card - that while their gift is so appreciated and makes a big impact in our community, their presence and involvement in community programs and also at the board level is what makes our community life rich."

Chisick has been involved in a variety of different capacities within YAD for over five years and became involved with Ben Gurion Society, a division within YAD and also became a canvasser.

Akman explains that the goals for this campaign for YAD "were to achieve 100 new YAD donors, to surpass the amount raised last year, and to create an inclusive group of young adults who are educated about what Federation does."

YAD is very close to reaching its goal. As Akman says "We are currently at over 90 YAD gifts and still counting!

This upcoming Sunday January 25th YAD is holding its Super Sunday Event, which Chisick explains is " a telethon to reach more of our donor base who have not yet made a campaign gift. We are so close to reaching out goal of 100 new YAD donors and hope to see lots of people come out to help us reach our goal and celebrate this milestone. It will be held at the campus. Also, next Saturday January 24, YAD is featuring Fire & Ice curling, which will be lots of fun."

When asked what the the most rewarding aspect of his involvement with this YAD campaign is Akman answers "It's to see the impact we are making in the Jewish Community. Members of all ages are taking notice of YAD reaching and exceeding our goals. We are proving that we will be the succession plan the community needs. Our steering committee has put a lot of hard work and effort in, and to see our efforts making this type of impact is very rewarding.'

Chisick adds, "Although this is a cliche, YAD is the future of our community quite literally and has the ability to make a big impact on the realities of Jewish life in Winnipeg through the funds raised and distributed to beneficiary agencies at the end of the campaign. Being a part of that is a privilege and it is rewarding is seeing our ideas come to fruition and our goals closer to being achieved but the biggest reward is working with great people, forging new friendships and making connections all in the aim of strengthening and supporting our community.?"

YAD recently had a very successful " fantastic" Latkes and Vodka event over Chanukah that was made possible by generous hosts, Myles Kraut and Jessica Kerzner who offered their home, as well as corporate sponsor, Stephen Rosenfield, and very hard working and creative committee members who planned the event.

"This event was really to thank our YAD donors who have contributed to the campaign and a chance to showcase to our growing YAD member base what to expect from YAD programs. It was really powerful to have a group of 100 young Jewish people in one room who have made it a priority to contribute to their community and to impart to everyone a sense of pride in our campaign accomplishments. It was noted throughout the night how special it was to go to a great holiday party that was celebrating Chanukah. We received great feedback from those who attended and it inspired our team to keep reaching out to others and to keep planning great programs," says Chisick.

Akman agrees wholeheartedly. "The Vodka Latkes event proved that we have an incredible group of young supporters in this community and that our campaign will be in good hands for the future." He adds, "Baillie and I believe in the Federation’s vision and are here to provide clear direction to achieve our goals which will benefit the Jewish community; now and in the future."

As Bob Silver co-Chair of this year's Combined Jewish Appeal campaign with Daniel Friedman says, "YAD has inspired Daniel and I . It is the actions of Baillie and Jared and all of YAD that have encouraged and challenged all of the campaign to succeed. They have shown us that this community has a future and can achieve amazing things."