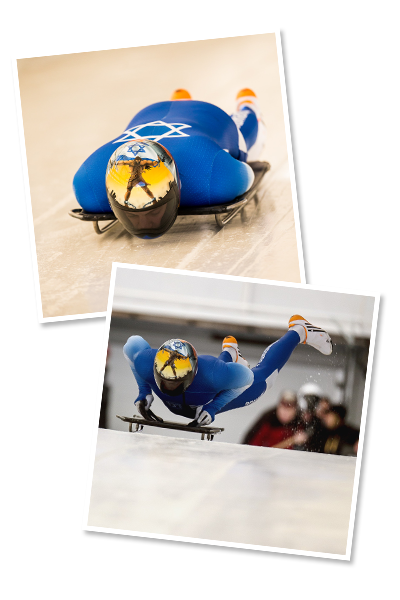 TEL AVIV, ISRAEL --- The Olympic Committee of Israel and Bobsled Skeleton Israel (BSI) announced today that Adam “AJ” Edelman has qualified to represent Israel in Skeleton at the XXIII Olympic Winter Games in Pyeongchang County, South Korea. This is the first time in history that an athlete will be represent Israel in sliding sports at the Winter Olympics.

The 26-year-old Edelman qualified for the 2018 Winter Olympic Games based on his results for the 2017-18 Skeleton season. The 5-foot-10, 190-pound native of Boston, MA, with dual citizenship will be one of 30 participants competing in Skeleton from February 15-16 at the Alpensia Olympic Sliding Center.

“I am thrilled to have qualified for the upcoming Olympic Games in PyeongChang,” said Edelman. “This has been a lifelong dream of mine and I am humbled and honored to represent Israel in Skeleton in South Korea. I’m excited to compete and will do my best to make Israel proud at the Games. I will serve as an ambassador of my country and I will be leaving a legacy that will hopefully inspire others to pursue.”

David Greaves, who resides in Winnipeg, Canada and is the President of Bobsled Skeleton Israel, said: “Following my bobsled career in 2005 as a brakeman for Israel’s first ever bobsled team, my goal was to recruit and develop athletes who could compete and excel at the highest level of the sport After more than 16 years we have finally achieved our goal of qualifying a sled for an Olympic games. But we are not done and plan on surprising some of the larger nations and programs. We have high expectations of AJ and this is only the beginning of our dream.”

For three seasons, Edelman has represented Israel in international competition, training to qualify Israel for the first time in a sliding sport for the Winter Olympic Games. Edelman burst onto the Israeli team in 2014, and has won three national titles. He is fulfilling his long-standing goal of representing his country and people on the international sporting stage.

As a Canadian with dual citizenship and an American with Dual citizenship, Greaves and Adelman may seem like an unlikely team but their love of sport and their homeland put them on the same trajectory and together they will be a part of sporting history when AJ is called to the start line at the upcoming Olympic games. Edelman has also been honored to represent Israel in two World Championships.