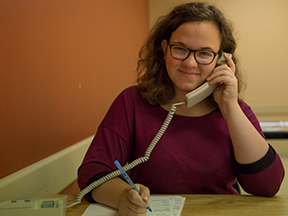 First, I’d like to introduce myself. My name is Priel Lisak, I’m 18 years old, and I’m the youngest canvasser for the Combined Jewish Appeal. I am originally from Israel and I immigrated into Canada and came to Winnipeg at the age of six with my parents, a few months before my brother was born. A few years later, we moved to the rural community of Gillam, in northern Manitoba. The town was made up of approximately 1200 people with my family and I being the only Jewish people there. Six years later, we moved back to Winnipeg in 2013; I was in the 10th grade.

I can truly say that living in a small community and not having anyone who understands and is accepting of the fact that I have different beliefs and practices taught me how incredibly important it is to stay true to myself and not let go of who I am just because the people around me don’t understand or accept it.

Which brings me to the present day. I am in my first year in the faculty of business at the University of Winnipeg and I have been a canvasser for the CJA for a few months now. Ever since I moved back to Winnipeg, I have been working on taking advantage of living and participating in the Jewish community and that is what inspired me to volunteer for CJA. I decided to become a canvasser because it gives me the opportunity to both participate in the Jewish community and allows me to also give back to the local community.

I believe it is important to contribute to the CJA campaign because it gives you the chance to be a part of something bigger. When I am speaking to donors and I say how incredibly grateful we are for their contribution to the campaign, I say it no matter how big or small the contribution is. Making a small contribution may not seem like it's doing much, but when your donation is put together with others, it becomes something much bigger and it is an incredible feeling to know that your contribution has helped make a difference in someone's life.

So far, my experience with the CJA has been incredible! I have collected many donations and I love talking to people so I hope to continue to be a part of the CJA canvassing team. It truly is an incredible feeling to know that what you are doing and the work that you’re doing makes a difference in the community and in people’s lives.