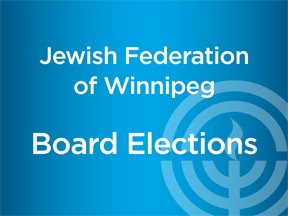 An election of members of the Jewish Federation of Winnipeg Board of Directors will be held in September for six three-year terms and two one-year terms, all commencing in December 2015.

NOMINATIONS FOR CANDIDATES FOR ELECTION MUST BE RECEIVED AT THE FEDERATION OFFICE NO LATER THAN 4:00 P.M. ON WEDNESDAY, SEPTEMBER 30, 2015.

CANDIDATES FOR NOMINATION, ACCORDING TO APPENDIX “A” IN BY-LAW NO. 1 OF THE JEWISH FEDERATION OF WINNIPEG, MUST MEET THE FOLLOWING REQUIREMENTS:

(a) Whose name is on the voting list on the first day of September in each year;

(c) Who has been nominated for election, as hereinafter provided; and

(d) Who is over the age of 18 and a contributor to the Combined Jewish Appeal.

Nominations must be submitted on the nominating form, which is available at the Federation office, located on the third floor of the Asper Jewish Community Campus (123 Doncaster Street) and select synagogues in the community.

PLEASE NOTE THAT A NOMINATION REQUIRES 5 SIGNATURES AND THE WRITTEN CONSENT OF THE NOMINEE. The only persons who may be candidates or who may nominate candidates are those whose names are on the voting list, which may be inspected at the Federation office.