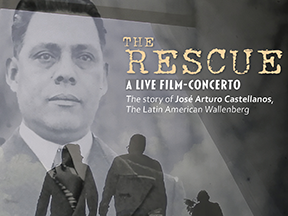 We were pleased to partner with CIJA (The Centre for Israel and Jewish Affairs), Canadian Museum for Human Rights, and the Freeman Family Foundation Holocaust Education Centre to commemorate the 80th anniversary of Kristallnacht on November 8 with a sold-out screening of The Rescue: A Live Film-Concerto which told a story of hope, friendship and courage – the story of diplomat Consul General José Arturo Castellanos, who saved thousands of Jewish lives in Nazi Germany.

Thank you to all who attended and got to experience the powerful and moving story of a person who selflessly risked everything to save lives in humanity's darkest hour.

Check out photos from the event here.