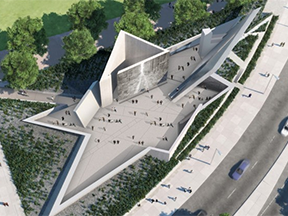 September 28, 2017  - Jewish Federations of Canada - UIA salutes the Government of Canada on the unveiling of the National Holocaust Monument in Ottawa on September 27.

"This monument honours the memory of millions of Jews killed by the Nazis. It will serve as an educational resource about the holocaust and its impact on the Jewish people. As many of our survivors pass on, the opportunity for people to directly connect with the history of the holocaust is shrinking. We must find innovative ways to educate the public about the atrocities committed by the Nazis and the modern achievements of the Jewish people."
- Heshy Altbaum, National Chair of March of the Living Canada.

Funded by individual donations and the federal government, the monument is designed to allow visitors to walk through the structures, going from darkness to light just as the 40,0000 holocaust survivors who came to Canada did decades ago.

Click here for more information about the design of the monument.

"As the primary organizer of March of the Living Canada and the March of Remembrance and Hope Canada, we recognize that this important monument will promote Holocaust Remembrance for the foreseeable future. This is a significant achievement for Canada."
-  Leslie Gales, Chair of Jewish Federations of Canada - UIA.