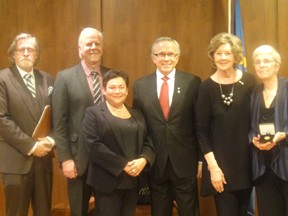 The Lieutenant Governor hosts an annual award for the promotion of intercultural and inter religious understanding in Manitoba. Rev. Karen Toole was this year's recipient. On January 7, 2016, approximately 100 representatives from the diverse ethno-cultural and religious streams in Manitoba attended the reception at the home of the Honourable Janice C. Filmon, Lieutenant Governor of Manitoba. Community Relations director Shelley Faintuch is a member of the steering committee for the award and had the honour of presenting this year's recipient.