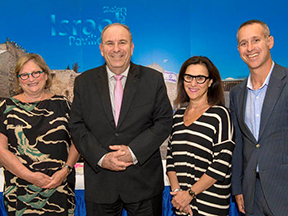 The Jewish Federation of Winnipeg welcomed Ambassador Nimrod Barkan, Israel’s Ambassador to Canada, August 16th and 17th this summer. Ambassador brought greetings at the Shalom Square Pavilion this year and was provided with an introduction to our local Jewish community.  Ambassador Barkan met with Provincial and Federal government representatives as well as local leaders in the Jewish community.

H.E. Nimrod Barkan arrived in Ottawa in December 2016 and has since spent his time working to strengthen ties between Israel and Canada, building on the common values between the two countries.

Ambassador Barkan is a 40 year veteran of bilateral and multilateral Israeli diplomacy, as well as policy making.

He rebuilt and ran the Center for Policy Research for the Israeli Ministry of Foreign Affairs during and after the second Lebanon war, headed the World Jewish and Interreligious Affairs Bureau, and has represented Israel in various positions around the world, including in the United States, Egypt and Paris.

The Ambassador is married and has two daughters.