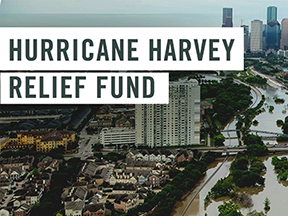 (Winnipeg, August 28, 2017) Houston - more than 6.5 million people…the fourth largest city in the USA has been sorely tested. The devastating rain and the catastrophic flash flooding continue. “Parts of our community have been impacted by the severe weather of the past two days. We are working with our partner agencies to assess the current situation in our community and determine priority on action items…” the Jewish Federation of Houston posted Sunday morning on Facebook. City workers, state troopers and even the army have all been called in to help. The storm has not only struck major population centres, the storm also struck the heart of the oil and gas industries.

Hurricane Harvey has been downgraded to a tropical storm but 15 to 30 more inches of rain are forecast for the Houston area, South Texas and parts of Louisiana. Thousands remain without power. Five deaths have been confirmed but the toll is expected to rise. “This rain will lead to a prolonged, dangerous, and potentially catastrophic flooding event well into next week,” the National Weather Service said.

It is at times like these when Jewish communities from around the globe come together. As it is said “Kol Yisrael arevim zeh lazeh” … "all the people of Israel are responsible for one another."

The Jewish Federation of Winnipeg has now opened a “Hurricane Harvey Relief Fund” to collect monies to support the communities that have been affected and that will need our help over the days, months and possibly years to come. All funds collected will go directly to the Houston Relief Fund.

To make a donation: Donate online now at www.jewishwinnipeg.org/hurricaneharvey or call 204.477.7428.