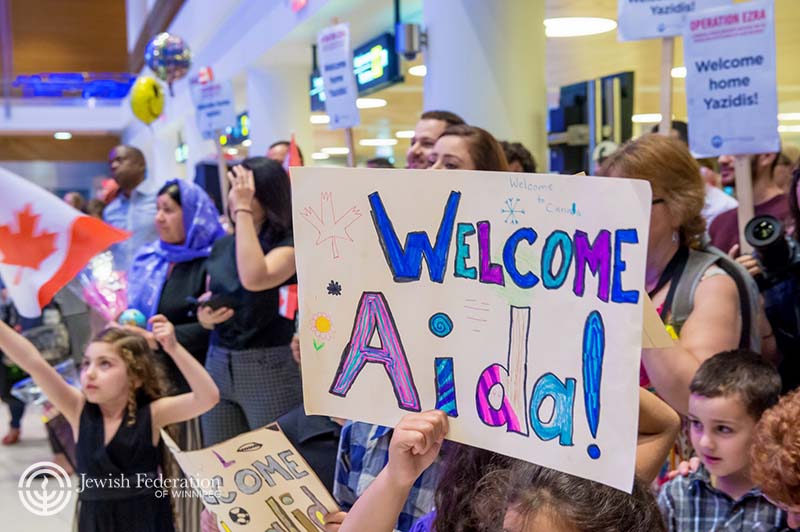 The first two sponsored Yazidi families arrived in Winnipeg on July 11, welcomed at the airport by family, friends, community members and supporters.

Check out the photos of their arrival here!

Forty-one Yazidi men, women and children are learning English, going to school, working, playing, feeling safe and secure, and freely celebrating their faith and culture in their new home of Winnipeg because of the grassroots initiative called  Operation Ezra.

Operation Ezra was launched in Winnipeg in March 2015 with two objectives - to increase general awareness about the plight of the Yazidi people in the Middle East, and to raise $35,000 for the sponsorship of a Yazidi refugee family to Winnipeg.

By the summer of 2015, Operation Ezra had raised that $35,000 and more, and grown into a Jewish community-wide initiative embracing dozens of volunteers and donors, as well as the support of the Jewish Federation of Winnipeg, Jewish Child and Family Service and Congregation Shaarey Zedek. In the ensuing months, Operation Ezra extended its reach even further, evolving into a coalition of 24 Winnipeg-based multi-faith organizations.

By March 2017, just two years after Operation Ezra was launched, the coalition had raised almost $500,000 and arranged for the private sponsorship to Canada of 10 Yazidi families, representing 55 children and adults. To date, seven of those families, accounting for 41 people, have arrived and settled in Winnipeg. Three more families, comprised of 14 individuals, are expected to arrive in the city before the end of 2017.  Most of the families have young children.

Operation Ezra weighs several factors in determining which families to sponsor. Firstly, all of the families considered for potential sponsorship must have official UNHCR registration and ID documentation. Once that is established, the Operation Ezra working committee considers the geographic location of the family, the size of the family, the ages of the various family members, the employment potential of the adult family members, and the likelihood of the family adapting to a new culture and country.  With a data base that now contains the names of 3,000 Yazidi refugee families hoping to resettle in Canada, selecting which families best meet the criteria for sponsorship has become an onerous and delicate undertaking.

So far, all of the newcomer Yazidi families have adjusted well to life in Winnipeg. The children are enrolled in schools and the adults are studying English in various programs, including a newly launched, weekly EAL program at Temple Shalom.  Jewish Child and Family Service has played a key role in mitigating the families’ acculturation and integration, as have more than 50 volunteers who have donated their time, advice and energy into ensuring that the Yazidis feel comfortable in their new surroundings and have everything that they need.

These volunteers have located housing, collected donations of household goods from private and corporate sponsors,  furnished and set up homes for each of the families, welcomed them upon their arrival  to the city, and assisted them with resettlement  tasks like setting up bank accounts and accessing provincial health cards.  They have shown them how to use public transportation, accompanied them to grocery stores and doctors’ appointments, helped them enroll their children in school, and find employment. In fact, seven of the adults who arrived in recent months are already working at full or part time jobs, and four more will be starting work within the month.

Operation Ezra is the only organized Yazidi rescue effort of its size in North America. In addition to its sponsorship activities, it has significantly raised awareness about the plight of the Yazidi people among the general public and in both the provincial  and federal legislatures. Operation Ezra’s ongoing advocacy and lobbying was instrumental in the federal government unanimously passing a motion last fall to take decisive action to save the Yazidis from genocide. Its efforts also directly influenced the Trudeau government’s decision, announced in February, to bring 1,200 government sponsored Yazidi refugees to Canada by the end of the year.

In just over two years, Operation Ezra has saved, resettled and given hope and a home to dozens of Yazidi refugees.

How you can help

June 20: Anticipation of their new home...