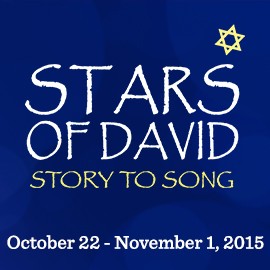 Stars of David: Story to Song

Based on the book by Abigail Pogrebin and conceived by Aaron Harnick.

A musical adaptation of the best-selling book Stars of David: Prominent Jews Talk About Being Jewish. Featuring songs by some of Broadway's finest writers, Stars of David is a funny and poignant musical that celebrates Jewish identity through true stories of icons from Leonard Nimoy to Joan Rivers, from Gloria Steinem to Kenneth Cole. come and see how their stories reflect our stories.