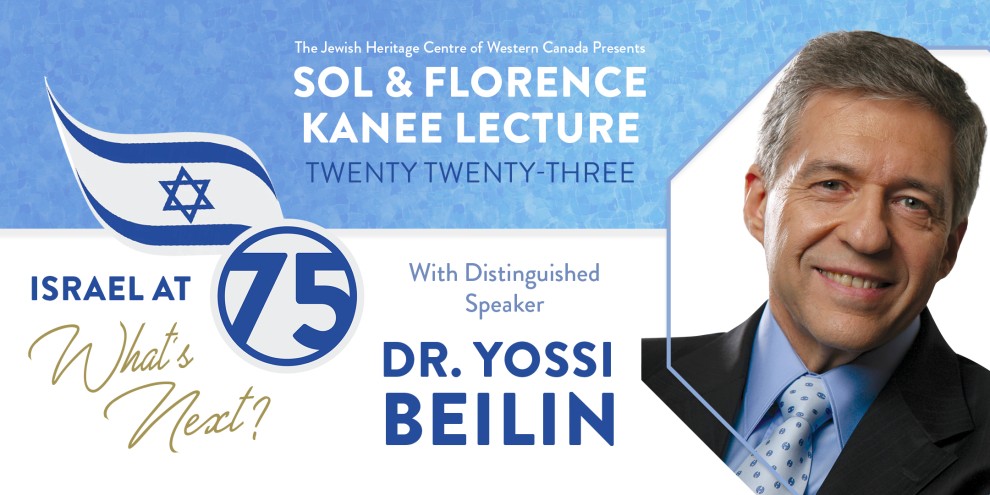 The Jewish Heritage Centre of Western Canada is pleased to announce that our 2023 Sol and Florence Kanee Distinguished Lecturer will be Dr. Yossi Beilin.  The event will take place at 7 pm on Wednesday, May 24, 2023, at the Canadian Museum for Human Rights.

With the approach of Israel’s 75th birthday, Mr. Beilin will examine the relationship between Israel and the Diaspora and the prospects of peace and relationship with the Palestinians under the new government.

For a man who never served as Israel’s prime minister, Dr. Yossi Beilin had an outsized impact on Israeli history. A journalist for the newspaper Davar who entered politics as a Labor Party spokesman before being appointed cabinet secretary by Prime Minister Shimon Peres in 1984, Dr. Beilin made his mark with two bold policies that were adopted by the Israeli government: the Oslo Accords between Israel and the PLO, and the Birthright Israel program.

A graduate of the Tel Aviv University holding a PhD in Political Science, Beilin served in the Israeli Knesset from 1984 to 2008. Among the many positions Beilin held were Cabinet Secretary, Director General of the Foreign Ministry, Deputy Finance Minister, Deputy Foreign Minister, Minister of Economy and Planning, Minister of Religious Affairs, and Minister of Justice. He also served as a member of the Knesset committees on Constitution, Law and Justice, Foreign Relations and Defence, and the Advancement of the Status of Women. He was the spokesperson for the Labour Party as well.

During his time in the foreign ministry, Beilin was responsible for the establishment of diplomatic relations with the Vatican.

In addition to his political career, Beilin chaired the Hillel Students Organization in Israel as well as the steering committee of the H.L. Education for Peace (Israeli Geneva Initiative).

Beilin is the author of several books, covering such topics as Israeli industry and politics, and the quest for a peace agreement.

Today, Beilin heads up has a private consulting firm — “Beilink” — that connects Israelis with governments and companies abroad. He also continues to work on two projects in the public arena: One is an effort to preserve Jewish cemeteries in Europe. The other, which led to the creation of Birthright, concerned the nature of the relationship between Israel and Diaspora Jews.

Tickets on Eventbrite.ca For sponsorship opportunities please write to jewishheritage@jhcwc.org